Finally, people have started raising their voices against the Chief Minister of Delhi, Arvind Kejriwal for his anti-national activities. After facing so many criminal cases, this time Kejriwal has been facing the case of sedition at Hyderabad.

A group of lawyers at Hyderabad raised their voice against Kejriwal for his full support of the students involved in JNU incident. 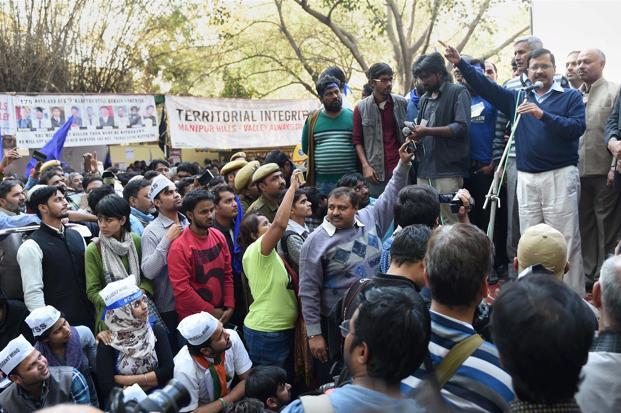 A sedition case was lodged against Kejriwal in Hyderabad on Sunday, deepening a row over alleged anti-national speeches at Delhi’s JNU that has seen violent protests and fractious Parliament sittings in recent days.

A first information report (FIR) was registered at Saroornagar police station at Hyderabad on the directions of a magistrate, who was urged to book the nine people by a group of lawyers.

The court passed the orders for the FIR on a complaint by Janardhan Goud and two other lawyers, who moved the court after police refused to register the case.

They alleged that anti-India slogans were raised during a protest organised at JNU on Feb 9 against hanging of Parliament attack convict Afzal Guru.

According to the petitioners, the Chief Minister of Delhi has violated the constitution of this country by supporting anti-national.

Kejriwal had fanned the anti-national spirit in Punjab also

Before visiting Punjab, Kejriwal had directed his party leaders to paste the posters of Bhindranwale pictures. The poster carried the picture of Kejriwal and other AAP leaders along with the militant Bhindranwale. The party had requested the people of Punjab to celebrate the birth anniversary of the militant. A resident of Moga had filed a criminal case against him in Ludhiana courts for fanning flame of communalism to divide Hindu and Sikhs.